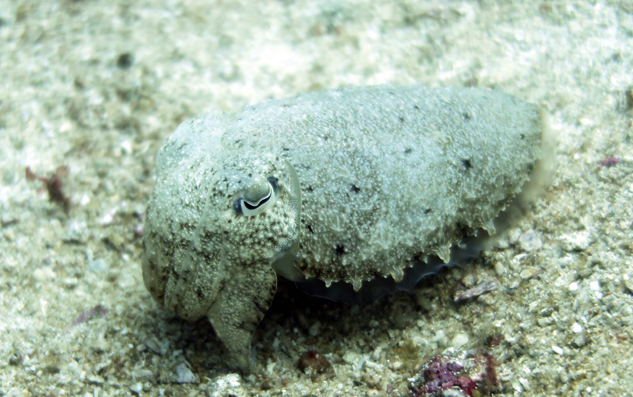 We often found cuttlefish while diving in Bali, here are 10 fun facts about Cuttlefish that you might want to know.

Two hearts are used to pump blood to the cuttlefish’s large gills, and the third heart is used to circulate oxygenated blood to the rest of the body.

Cuttlefish can see what’s behind them. It can see well in low light and can also detect polarized light, enhancing its perception of contrast. The cuttlefish moves its lenses by reshaping its entire eye. Also, the cuttlefish’s eyes are very large in proportion to its body and may increase image magnification upon the retina, while the distinct ‘W’-shaped pupil helps control the intensity of light entering the eye.”

Cuttlefish are referred to as the “chameleons of the sea” due to their color-changing abilities. They can do this even though they are completely color blind. They can even successfully change color to match their surroundings in complete darkness. Cuttlefish are cephalopods, which means they are in the same class as octopus who are also great at camouflage.

There are over 100 species of cuttlefish. These animals vary in size from a few inches to several feet in length. The giant cuttlefish is the largest cuttlefish species and can grow to 50cm in length and more than 10kgs in weight.

The cuttlefish has two long tentacles that are used to quickly grasp its prey, which it then manipulates using its arms. Both the tentacles and arms have suckers.

6.     Cuttlefish Have a Short Lifespan

Cuttlefish mate and lay eggs in spring and summer. Males may put on an elaborate display to attract a female. Mating occurs with the male transferring a sperm mass to the female’s mantle, where it is released to fertilize the eggs. The female attaches groups of egg onto objects (e.g., rocks, seaweed) on the seafloor. The female stays with the eggs until they hatch, but both the male and female die shortly afterward. Cuttlefish are sexually mature at 14 to 18 months of age and only live 1 to 2 years.

7.     Cuttlefish Propel Themselves With Fins and Water

Cuttlefish have a fin that goes around their body, which looks like a skirt. They use this fin for swimming. When quick movement is needed, they can expel water and move by jet-propulsion.

8.     They Use A Cuttlebone to Regulate Buoyancy

Within their bodies, cuttlefish have a long, oval bone called a cuttlebone. This bone is used to regulate buoyancy using chambers that may be filled with gas and/or water depending on where the cuttlefish is in the water column. Cuttlebones from dead cuttlefish may wash up on shore and are sold in pet stores as a calcium/mineral supplement for domestic birds.

When threatened, cuttlefish may release an ink called sepia in a cloud that confuses predators and allows the cuttlefish to get away. This ink historically was used for writing and drawing, can be used to treat medical conditions and is also used as a food coloring.

Cuttlefish can’t see color, but they can see polarized light, an adaptation which may aid in their ability to sense contrast and determine what colors and patterns to use when blending into their surroundings.  The pupils of cuttlefish are W-shaped and help control the intensity of light entering the eye.  To focus on an object, a cuttlefish changes the shape of its eye, rather than the shape of its eye’s lens, as we do.