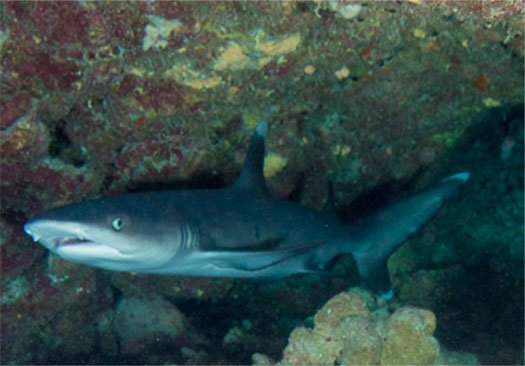 Posted at 02:12h in News by pieterlammers16@gmail.com 0 Comments
0 Likes
Share

Diving in Bali means breathtaking diving with an enormous diversity of underwater life. The small and medium-sized fish and other creatures of the ocean swim around you with large numbers every dive, but there are four marine animals that you really want to see while diving in Bali. Then we are talking about the manta rays, the mola mola and the white / blacktip reef shark.

Each dive is different and there is never any certainty whether you see the four marine animals while diving in Bali, but when you see them it is so impressive. Let’s start with the manta rays. Many people undoubtedly have heard about this, but when is the best time to see them and what kind of marine animal is it?

Mantas
You can see Mantas all year round on Bali, cool huh! However, the best time to dive on Bali is between April and November when the rain season is over. Although you can also dive very nicely during the rainy season.

Mantas belong to the family of eagle rays. There are two types of mantas that occur on Bali, the so-called reef manta and the oceanic manta. The average width of a reef manta is between 3 and 3.5 meters with a maximum of up to 5.5 meters. The oceanic manta can grow up to 7 meters wide.

An important part of the life of the mantas revolves around “cleaning stations”.This process involves small fish that remove dead skin and parasites from the manta’s body. Many manta rays wait their turn until they can be cleaned from their dead skin and parasites. This process is one that contributes to the survival of many species of fish in their habitat. So win win situation! 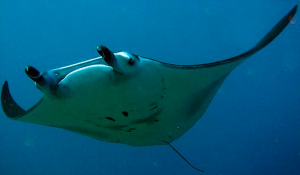 Mola mola
Another marine animal you really want to see while diving on Bali is the mola mola. You can generally spot the mola mola (sunfish) between July and October. Then the water is cooler (around 20-23 degrees) and the mola mola comes up to clean themselves by the hand of cleaning of fish. They even jump out of the water to remove the large parasites from their bodies. The best place to spot them is around Candidasa and Nusa Penida.

Fun fact: Did you know that the mola mola is family of the pufferfish. They come from the order of Tetraodontiformes including the pufferfish and the triggerfish.

The mola mola is the most well-known bone fish. An adult animal weighs an average of 1 ton, and is 1.8 meters in size, but there are species known that weighed 2300 kilograms and were 4 meters high at the fins. The sunfish lives in all major oceans where the climate is moderate to tropical.

The menu of the sunfish contains jellyfish, small fish and plankton. It has almost no natural enemies because they are so large and have very tough skin. The sunfish is a very shy fish and does not like the bubbles of your regulator when you breath out. Therefore, always stay at a suitable distance, otherwise the chances are that the mola mola will swim away. Another nice fun fact about this sunfish is that the female can lay up to 300 million eggs, which is a record for a vertebrate animal. 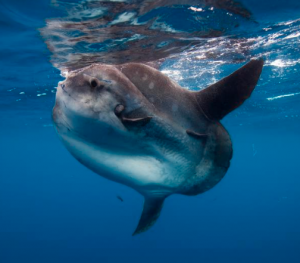 During the day the sharks often relax in a cave. This is also the best place to spot them as most diver’s dive during the day. In the evening they come out of their cave to hunt for fish that have settled in the coral to enjoy their night’s rest. Some of them will not reach the end of the night as the whitetip is an excellent hunter among the coral. To get hold of their prey, they bite off pieces of the coral to get to the prey. They often hunt in groups and go after the same prey to ensure that all exits are blocked and the prey cannot escape.

Rarely there is a registration about a whitetip attack on a human, this also applies for the black tip. There have been cases of spear fishermen attacked by these sharks, but that was purely because they went after the fish that the spear fishermen had caught. 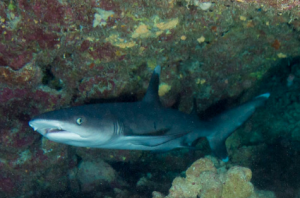 Most sharks can be found in shallow waters. The blacktip is a very social shark, although they are generally shy, they are often curious about snorkelers and divers. They are mainly found in larger groups, probably because they are shy towards other predators, so they have the safety of the group.

Fun fact: The blacktip reef shark is one of the few sharks that can jump out of the water completely!

Both white/blacktips are at the top of the food chain and are very important for the underwater ecosystem. By controlling the fish population, they ensure that the ecosystem remains healthy and equal.
Other sharks that you can spot while diving in Bali are the hammerhead, thresher shark, whale shark, wobbegongs, nurse shark and bamboos shark.

If you want to see these amazing sea creatures with your own eyes, come and dive at Joe’s Gone Diving in which we take you to the most beautiful dive sites in Bali.